In this post I go through the steps of designing a 3D printed prototype of a plastic product.

The project I am covering is a cold air intake scoop for a car that sees some track days. The scoop mounts under the front fender and connects to a flexible hose that runs up to the engine compartment. I have made one before for my car, but recently I was asked to sell one. This was also a good opportunity to document the steps of developing a 3D printed end product. 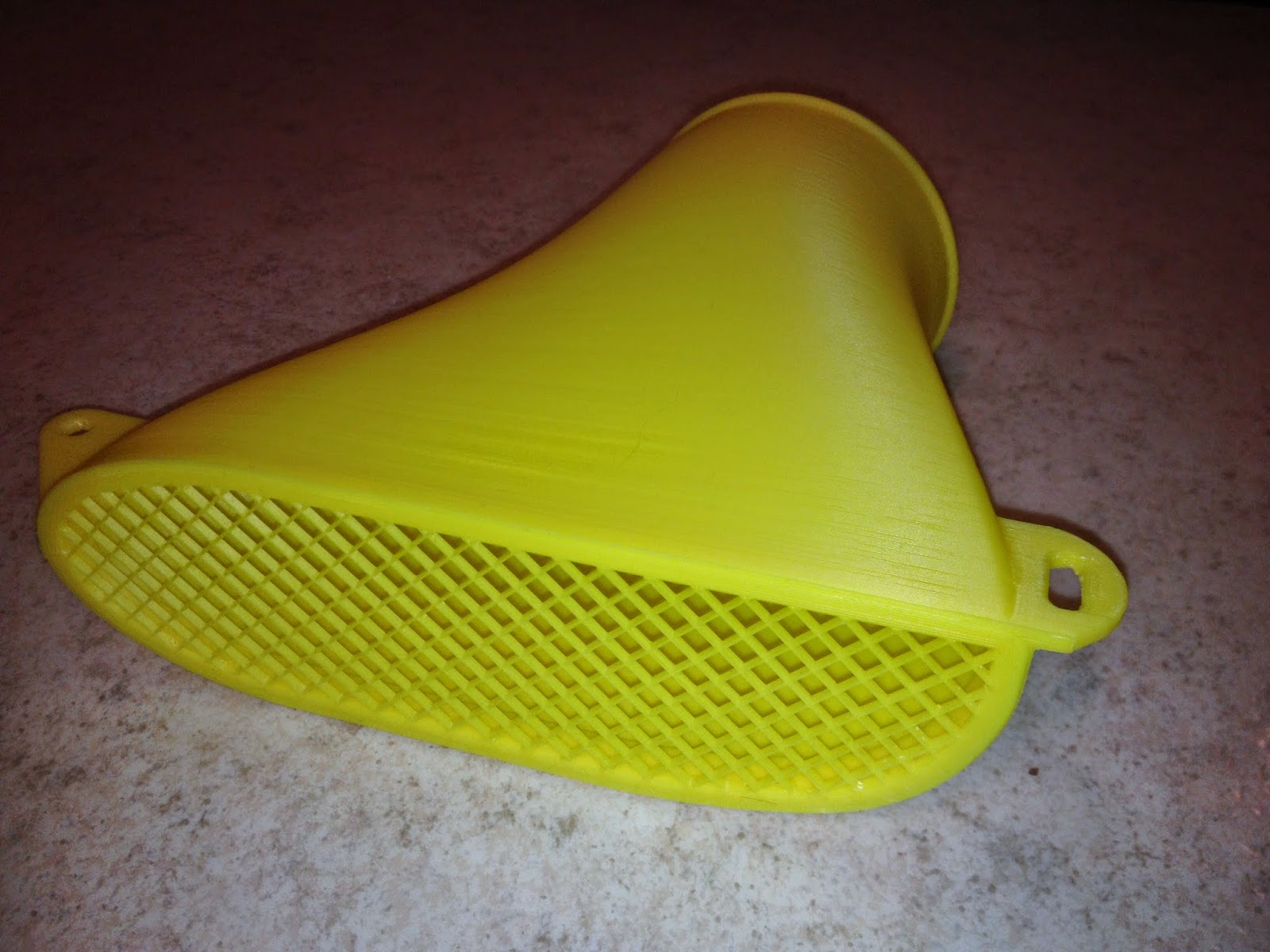 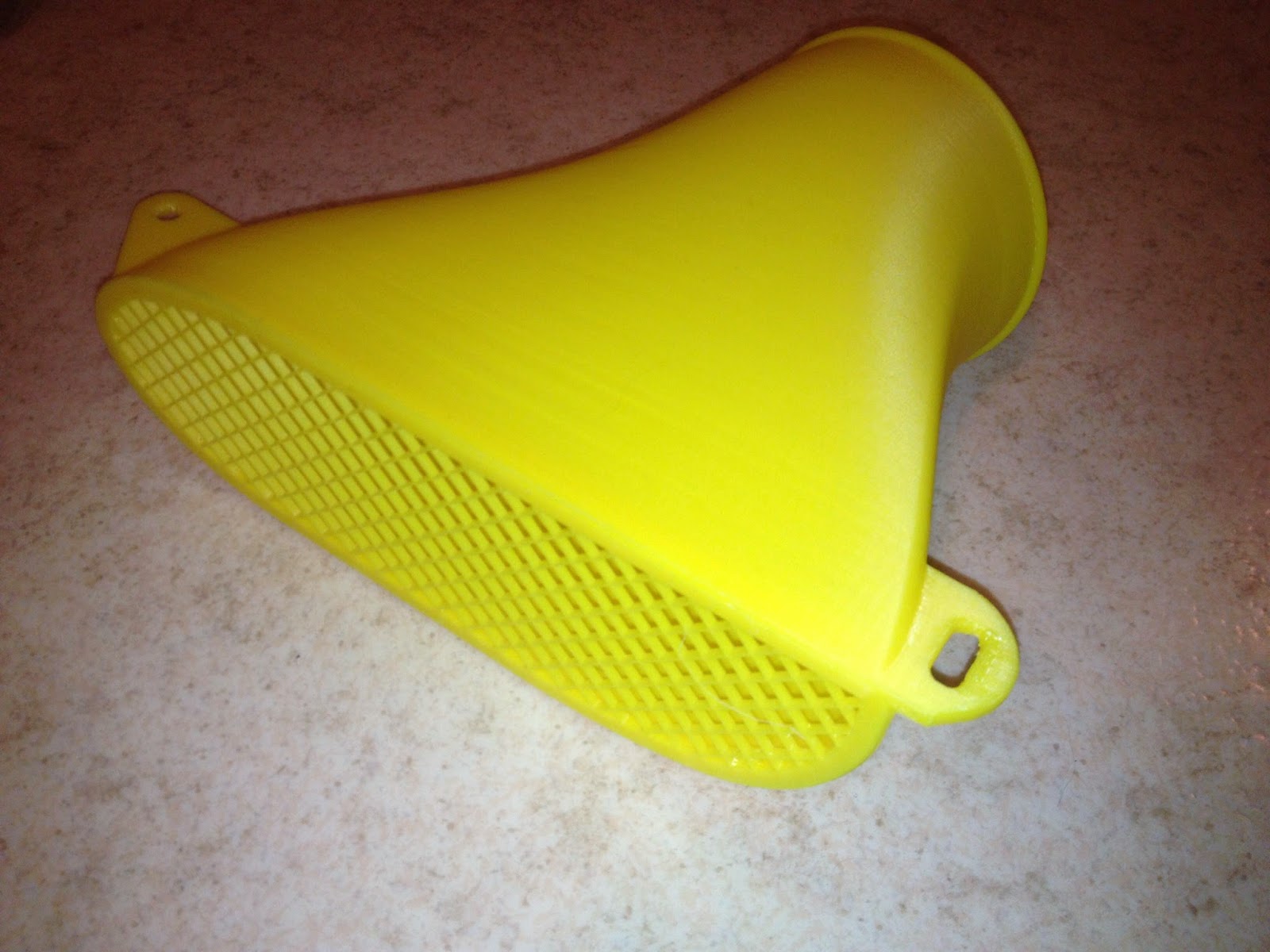 First I observed the car for a convenient mounting location and wrote down some dimensions for existing mounting points. Then I sketched and cut a template of the intake side and trimmed it to desired shape while comparing its fit to the front fender. I also noted which way I wanted the hose to be pointed.

When the template was complete I scanned it and sketched over it in CAD. Next I sketched the shape of the other end to an appropriate place. From there it was easy to extrude the final shape between the ends and add the mounting flanges. I chose to leave the front facing end flat as it will provide good contact with the build plate. The flanges are designed to be easy for the printer to build with no significant overhang.

I left the model intentionally solid for reasons I will explain next.

The model is exported as .stl file and imported to the printed software. For this application I used Cura, which is free and open source. It combines two programs needed for the print; the slicer, which plans the physical moves, and the host, which sends these planned moves to the printer.

The slicer takes in parameters that affect the print. The most important is the layer height. For my printer this can range from 40 microns to 240 microns. Thinner layer height will naturally take longer to print, but the finish is smoother. For this project I set it for 150 microns. Next parameter is the infill rate. This can range from 0 to 100, 0 making the object hollow and 100 making it completely solid. As you can probably guess, I will set this to 0.

Now my object will be hollow, but very brittle. Luckily I can also adjust the amount of perimeters the printer will make around the edges of each layer as it builds the walls. With top and bottom gone and infill at zero, these perimeters are the only thing that will be printed.

This shows that starting with solid object has two advantages. Printing only the perimeters is very fast compared to zig-zagging infill moves, and I can adjust the thickness of the walls without changing the actual 3D model. This method is very effective and popular among those who print vase like objects.

The material used is ABS. It has high tendency to shrink when cooling and thus heated build platform is set to 115'C and the build chamber is heated to 70'C to prevent curling or cracking.

This object is relatively big and took about two hours to complete. For slower machines the time could be near ten hours. Fast manufacturing also presents one of the obvious benefits of 3D printing; iteration. I started with three perimeter thick walls. This means the printer extrudes three loops in the shape of the object before moving up to the next layer. I started with thin walls just to test whether it was enough. In this case it was too flexible so I set the perimeter count to five. This produced a solid object with walls just the right size, but took near to five hours to finish. 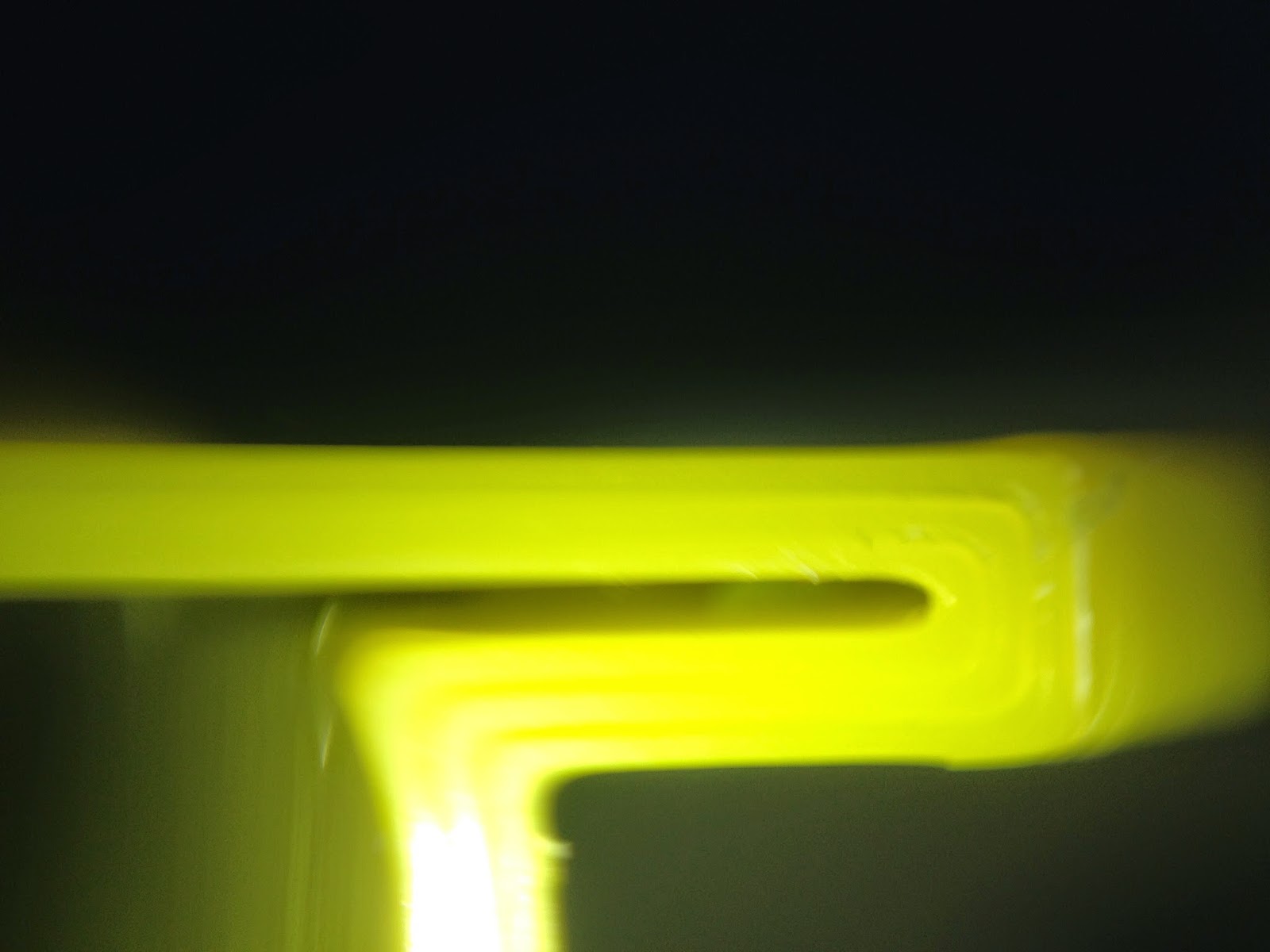 Three perimeter walls were too flexible. 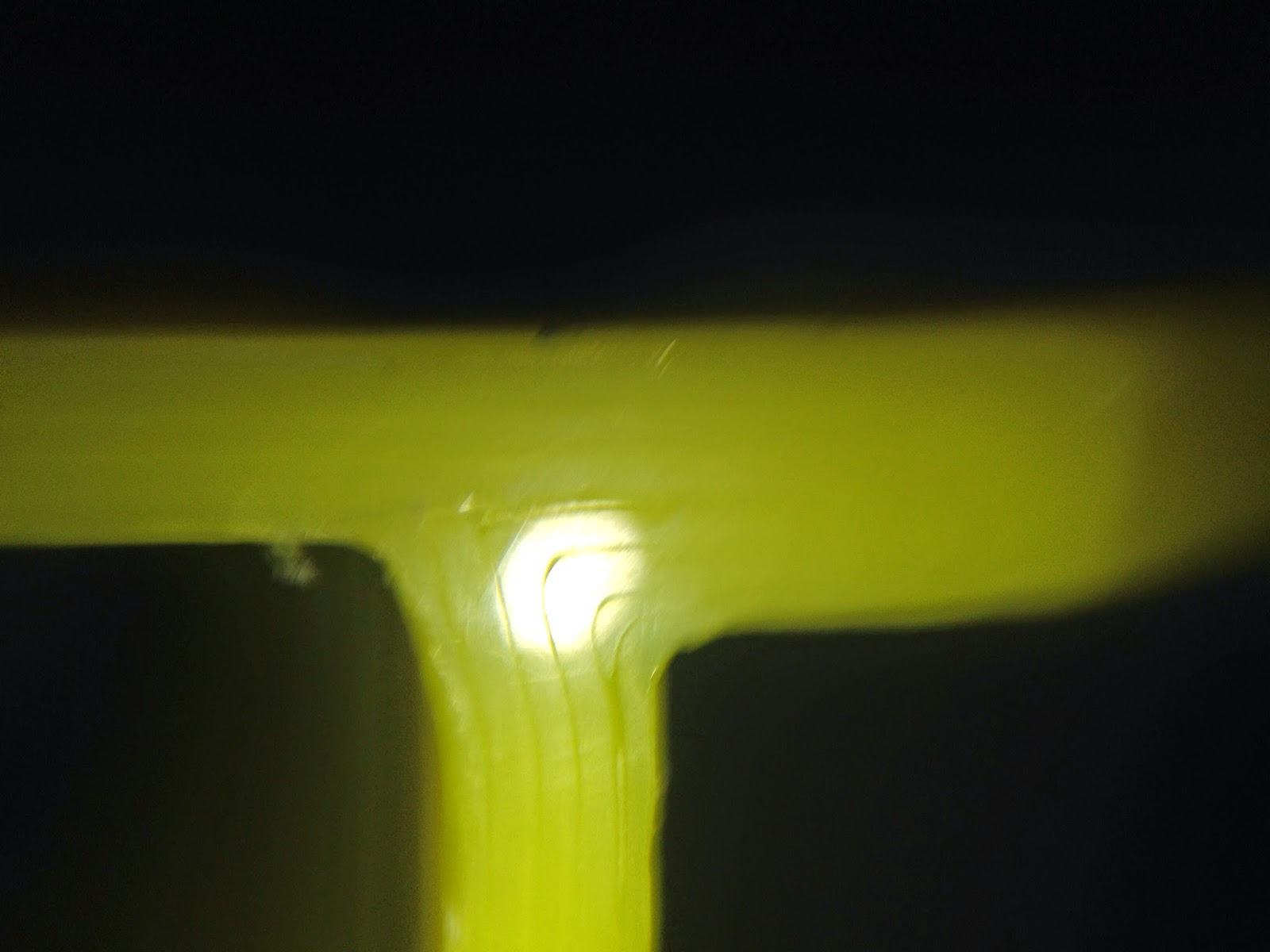 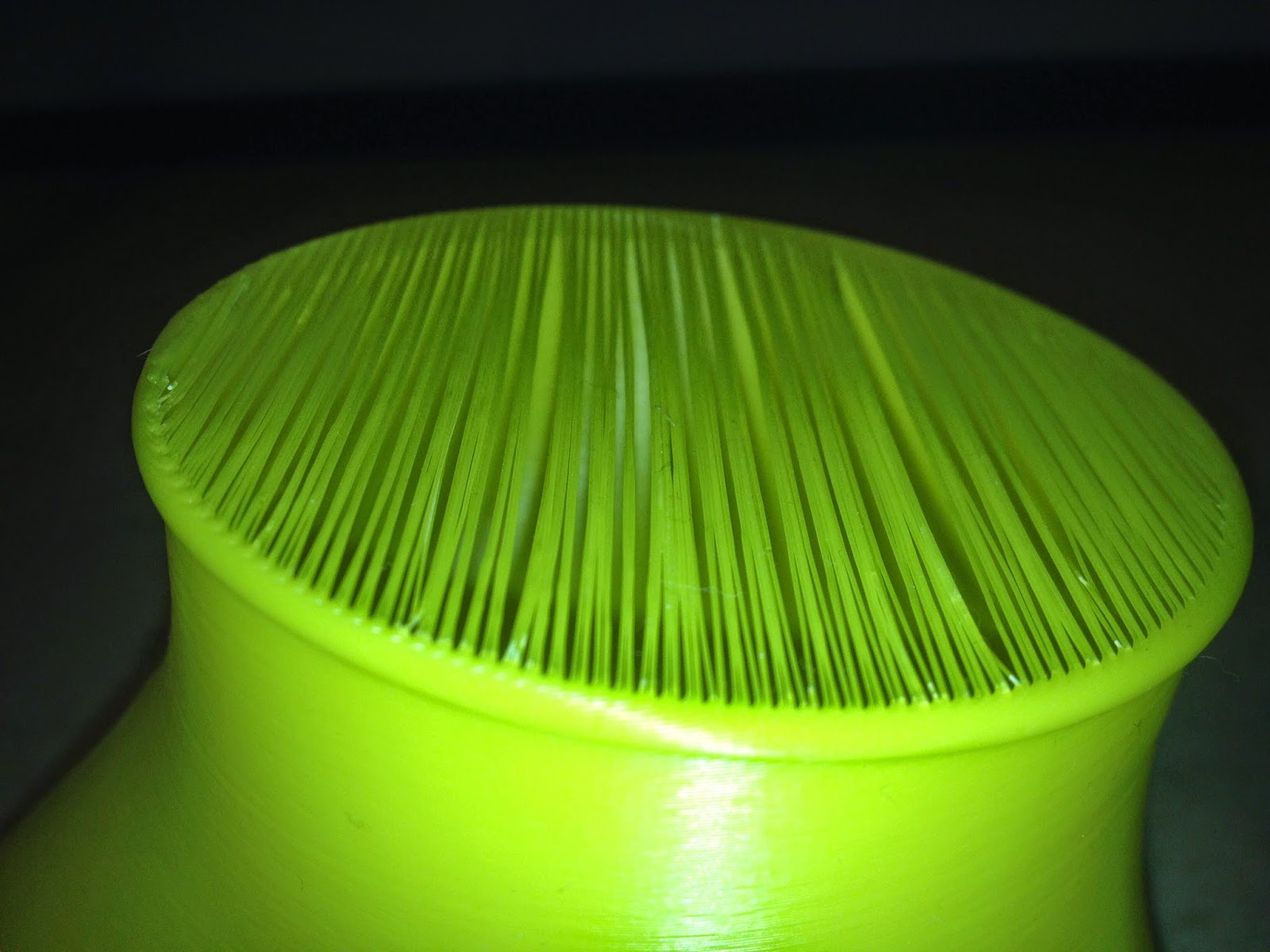 Additional perimeters had to be removed after the print.

You may notice that the top was not actually open as you may have suspected. This is because it is not horizontal, and the strings closing the top are considered to be part of the wall by the slicer program. Removing these strings took less than a minute and was the only post-process needed.

I thought I should give a go at making a grill for the scoop as well. When designing it I chose to use the same trick used before and left the grill solid. This way I saved a lot of time not drawing the actual grill holes in the model and makes the density of the mesh adjustable. 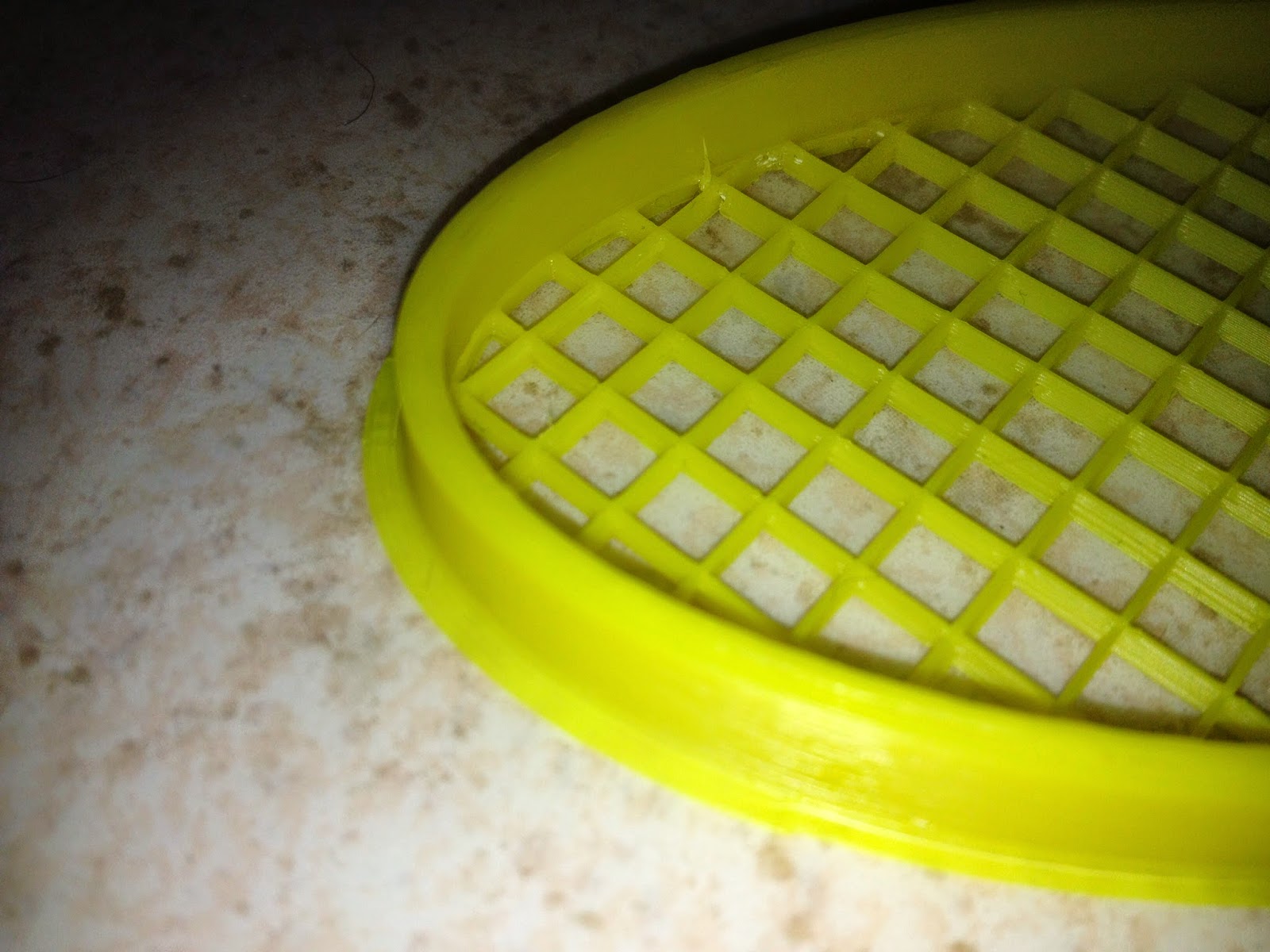 Mesh and flange are adjusted with the slicer program.

Just like with the scoop I set the top and bottom infill to zero and outer perimeter thickness high. Only this time I set the infill to non-zero. This creates a nice mesh inside the perimeters normally intended to stiffen the object. The infill percent is completely parametric so again I can find a suitable value without actually doing anything to the simple 3D model. Spacing of about 5 mm was obtained with the infill set at 15%.

The flange in the grill would have been easy to model, but I chose to create it with the slicer program too. It is called skirt and is used to improve the prints adhesion to the bed. The width of the flange is also parametric when created with the skirt option.

This was a one off project that I have no intention of continuing. However I am more than willing to help anyone with a similar project or print more scoops for people who are interested.

To mass produce this product one should make it a generic model that fit's more cars. Even if created for a car community in larger numbers (still less than 50) I would probably go with FDM methods. 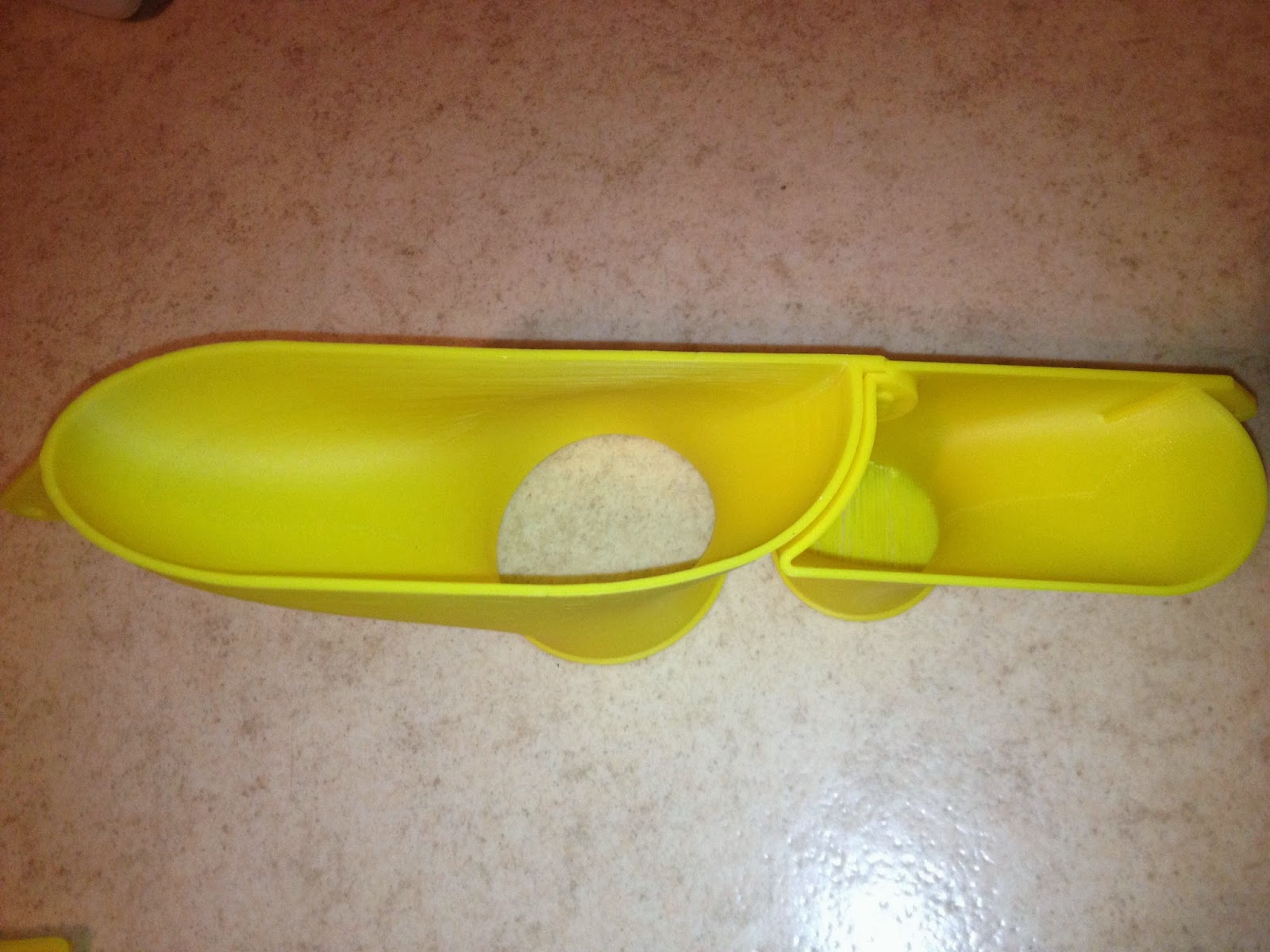 I also played with the idea of adding smaller scoops for brakes, but this turned out difficult as the original scoop was not designed this in mind.

Colorize - Electronic game in an afternoon

I attended an afternoon session at my uni called Electronics Crash Course. The session started with a generic step-by-step guide on how to blink an LED with a Teensyduino followed by 4.5 hours of ten work on an electronics game using basic components. The games were then presented to and tested by other students. Our team was one of six and had three members. 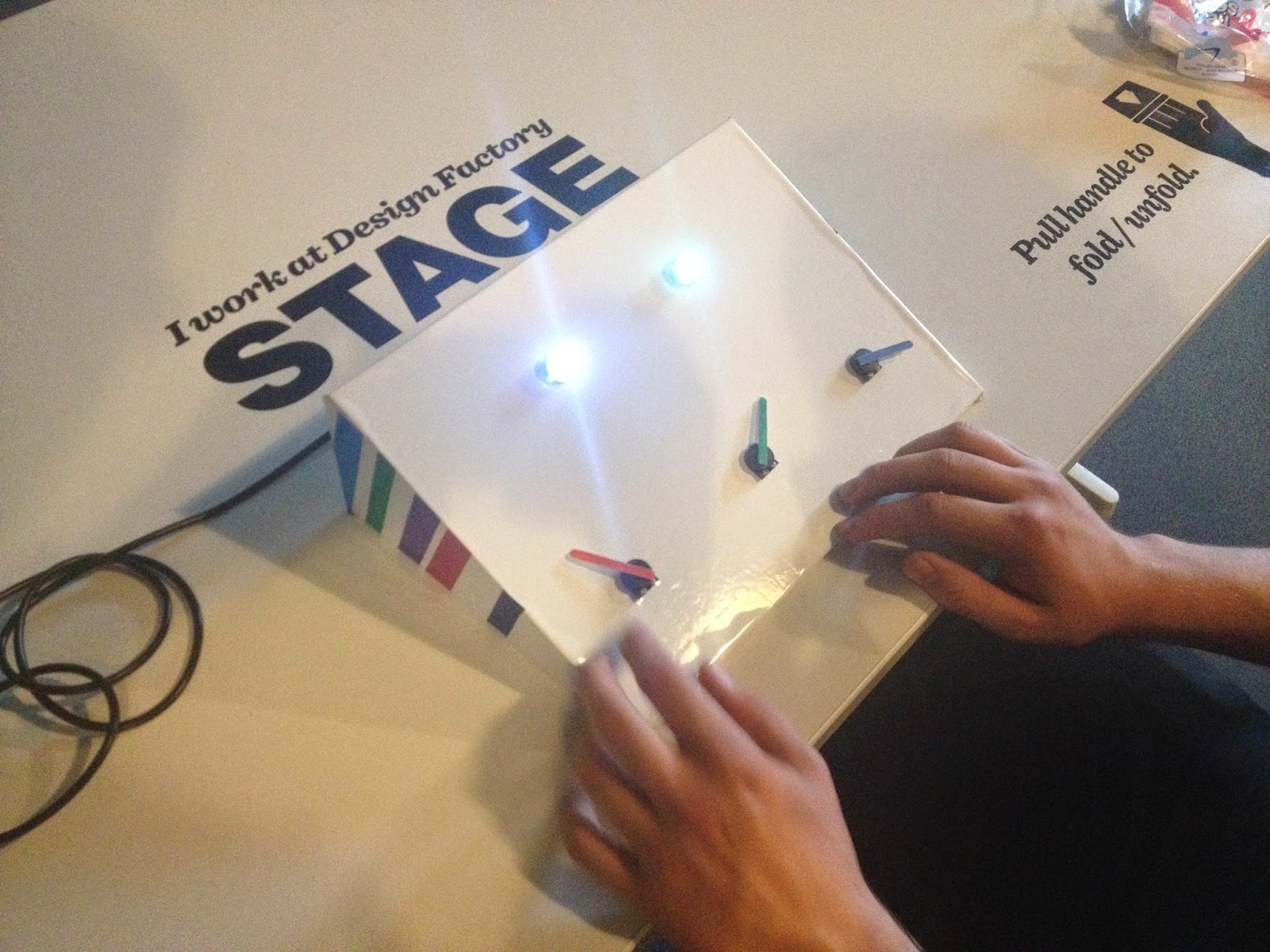 During this exercise we had to utilize:
- Programming with Arduino IDE
- Soldering and developing with electronics (Teensyduino)
- Prototyping (concept, design, build, test..)
- Time management

Having done PD6 exercises I had a realistic idea of what we could be able to establish during the time we had. Luckily I came up with the initial idea in a moment and we went with it so no time was spent on brainstorming.

The goal of our game is to match an led's color to another led thats color is randomized. The matching is done by adjusting the red, green and blue channels of the led that are driven with PWM. After the color is matched an indicating sound is played and a new color generated.

We had good ideas on how to improve the game throughout the process. Score calculation and timed rounds were the most likely ones to be implemented using 7-segment displays. However we valued the idea of a finished and functioning prototype more than an unfinished cluster of electronics that was too complicated to finish in time.

We proceeded effectively step by step. First generating the code and testing it to a point where we knew it would work as one of our team members hunted for all the components we would need. We also agreed on physical size and UI layout. After this we created a simple enclosure with plywood and coated it with vinyl as we had no time to paint it. Again ideas of additional features were flying back and forth, but we stayed in our plan; only after finishing the initial working prototype would we add more functionalities.

Assembly and soldering took a good portion of time in the end and at finish we only had about ten minutes remaining, which we used to decorate the project. This was with a careful time frame and expecting little setbacks, which we luckily did not experience.

Before the exhibition we had some time to test the game further ourselves and even collect some feedback from others. People seemed to like the game and only change we done was to swap places with the less for a more intuitive experience. After the exhibition all the games were free to test and a favorite was voted. This for my surprise was our team. Other teams showed good effort and ad created fun games as well.

This was a fun project from which I think we all learned. Being already acquainted with electronics I found the most rewarding our successful use of time. Also showing other team members what can be done with an Arduino in a short period of time was fun as I took the time to go through the basics and create an easily understandable code.

Our project doesn't end here as we plan to develop it further and leave it in public for people to use. We would also like to gather feedback and ideas from users that we could learn from and apply to later projects.
Lähettänyt villekl klo 9:57 PM 1 comment: